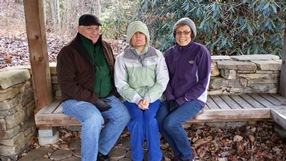 Dear Intercessors and those who have signed up to receive Discerning the Times,

I hope all of you are doing well. I have so appreciated your emails and responses to recent notes asking for discernment and prayer about the wave of the Holy Spirit into which PRMI is caught up. I try to answer you personally as much as I can. Please know when I don’t respond, I still consider your contributions carefully and when possible include them in a Discerning The Times.

First – I have received amazing responses to the guidance I shared from Kim about asking for a specific amount of money by a specific date. We are called to ask our Father for $93,000 by Dec 31, 2013.

We did receive clear guidance. We acted upon it. I do not see this as guidance applied to this single instance, but rather as a directive to continue to pray specifically in like fashion for the Lord’s provision in the year to come. One danger is daring to tell our God what to do!

The other danger is not being specific enough in our asking. The key, of course, is to ask according to the Will of God. So, we ask the Father to provide precisely as the Holy Spirit directs us to pray in Jesus’ name.

Some our staff prayer time was spent at the Community of the Cross’ Ascension Point. It was a very cold day! The Lord clearly told us to ask Him for what we needed to break even by the end of the year. This ended up being $93,000.

Now, if the Lord were to send more than that, we would rejoice. Within that amount, there is no start-up for 2014. That knowledge leaves us a bit weak-kneed. However, since $93,000 is the number the Holy Spirit gave us, we have to believe our Father is teaching us simple, radical, moment by moment obedience. We could be tempted to name a higher figure, “fudge it” by asking for more than we need to finish 2013 in the black and so have a good start for next year. We refuse to do that. Thank you for your continued prayers as we are stretched in our prayer relationship with our Father finishing this year and heading into 2014.

Some of you sent in numbers of 1.5 million and even 5.5 million. The interesting thing is that the 5.5 million is what is needed to complete the major building projects at the Community of the Cross that are already listed in the 10 year development plan. We felt that this may be something to pray into and receive guidance about for next year and the next three years. END_OF_DOCUMENT_TOKEN_TO_BE_REPLACED