Let's lift our heads up out of our spiritual foxholes for a moment. We'll take a breather to view the big picture of how our prayers help advance the Kingdom of God. … END_OF_DOCUMENT_TOKEN_TO_BE_REPLACED 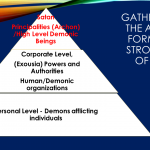 Dear Intercessors: The Lord is sending a great wave of the Holy Spirit among the people of Iran. The intention is to bring the freedom and life of Jesus Christ into their hearts. Such a revival would reverberate throughout Iranian society. This is battle space three with which intercessors are familiar. Together we rejoice in people's salvation. Our joy can increase … END_OF_DOCUMENT_TOKEN_TO_BE_REPLACED

The Iranian people are erupting in protest against the oppressive Islamic theocratic leadership. While driven in part by economic concerns, the protest may also be a rebellion against Islamic tyranny. For a number of years now we have been called to pray for defeating the demonic stronghold of Radical Islam in Iran. … END_OF_DOCUMENT_TOKEN_TO_BE_REPLACED

Receive Discerning The Times, an email digest of blogs written by Dr. Brad Long offering discernment on current events and educating people to issues that face the Church today, for the purpose of mobilizing intercessors.

You may opt-out from receiving our newsletter at any time. We value your information and will never sell or share it.

Resources for Growing as an Intercessor

Read more on Discerning The Times