You are here: Home / Discerning The Times / Dealing with the “Act of Pure Evil” in Las Vegas

I certainly wish the Devil would take a holiday and let us intercessors catch up a bit.  I know I am sending you a lot of Discerning the Times articles, but this spiritual warfare that we are engaged in and the call to intercession just keeps accelerating.

On October 2, 2017 there was terrible mass shooting attack in Las Vegas.

Just check the internet for both the original and follow up reports.

And here is a summary from Fox News:

“It was an act of pure evil,” Trump said.

In a unifying, faith-focused speech from the Diplomatic Room at the White House, the President offered his prayers through this “very dark period.”

“To the families of the victims, we are praying for you and we are here for you and we ask God to help see you through this very dark period,” the President said. “Scripture teaches us the Lord is close to the broken hearted and saves those who are crushed in spirit. We seek comfort in those words for we know that God lives in the hearts of those who grieve.”

The President called upon “the bonds that unite us,” including faith, family and shared values. “Our unity cannot be shattered by evil. Our bonds cannot be broken by violence,” Trump said. “In times such as these, I know we are searching for some kind of meaning in the chaos, light in the darkness. The answers do not come easy.”

He added, “But we can take solace knowing that even the darkest space can be illuminated by a single ray of hope.”

Trump said that he and the first lady “pray for the entire nation.”

“We pray for the day when evil is banished and the innocent are safe from hatred and from fear,” Trump said.

How is the Lord calling us as intercessions to step into this situation?

What is our role?   Right now in the midst of the unfolding information about this event, it still feels like there is a whole lot we do not know.   So the guidance I propose here for prayer is at best tentative.

I have been asking the Lord, “What are you doing?  And Lord, please reveal what the Devil is doing.  And come Holy Spirit and guide us as to how You are calling us to pray into this situation.”

An Intercessor asked this question:

Do you have good intel on the Las Vegas shooting?  There are wildly diverse views of the crime.   It may not be terrorism, but is certainly terrible.   Interestingly, POTUS is silent on the terror angle.  We know it is the destructive work of the Enemy, but it may simply be revelatory of the terrible results of trying to solve problems with gun violence.

My answer is no, at this point I do not have good intel.  Actually it does not seem that any one really knows, which is why Trump was wise to not speculate.    This is why it is urgent for us to ask the Lord to reveal this to us so that we can know better how to pray to bring the light of Jesus Christ into this situation, with the aim that future such acts of pure evil may be prevented.

There is still, even on Oct 17th, lots of speculation as to motives.  There are all sorts of theories, but nothing seems very firm.   One intercessor, Jon Gurley, noted:

It seems that each time something like this happens, different proposals are offered, usually based on the commentator’s worldview. For instance, it is mental illness, or white rage, or Radical Islam, etc.  As intercessors, we must be careful to not let Satan use our own sets of presuppositions to blind us.

Our prayer strategies cannot be based on speculation as to the shooter’s motives or the source of the evil we saw so clearly demonstrated in these terrible actions.

As you receive revelation about this, revelations that can be substantiated by the actual facts, please pass that information on to all of us.

In the following report, ISIS took credit for this atrocity:

The Islamic State reinforced its earlier claim of responsibility for the atrocity with another communiqué Monday night, which named Stephen Paddock “Abu Abdul Bar Al-Amrekini” and said he had carried out surveillance of the concert arena opposite the hotel before murdering 58 people and injuring 515.

The first ISIS notice claimed that he had converted to Islam some months earlier. While an official US spokesman stressed there was no indication at this time of Paddock’s affiliation to any international terrorist organization, various Middle East sources said overnight Monday that he had been in contact with certain quarters in the region, and claimed the FBI had photos recording his visits. No specific country was named in these reports.

So far there has not been any validation of this claim.  However, what I have seen is that ISIS is using this event as the basis for speaking curses against President Trump and against the United States.

We find these curses being formed against us listed in a report an OCTOBER 4, 2017 10:51 AM BY ROBERT SPENCER – ISIS hails Las Vegas shooter as “lion of tawhid” 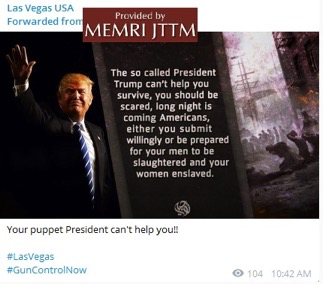 “America has sunk and there is no savior, and became a prey to the caliphate in every corner of the earth.

“Know that #IslamicState won’t stop fighting you in every Corner of the globe until you accept Islam or Pay Jizyah [poll-tax on Non-Muslims] with Submission.

Whether or not ISIS actually conducted the attack, I do not know.  What is certain is that they are using this to speak curses against America in the words and image above.

These must be broken in the name of Jesus Christ. And then, I believe, we are called by the authority given us in Jesus, to proclaim blessings to replace these curses.

We need to pray for the guidance of the Holy Spirit as to the words that He is calling us to speak, to write, and to announce over the internet via video.

Please be led by the Holy Spirit in this, but here are some suggested prayers:

Lord Jesus Christ, we pray that through this terrible event that what Satan intended for evil, will humble us, and lead us to confession and repentance of our sins both as a individuals and as a nation.

2 Chronicles 7:13-14 NET. (13) When I close up the sky so that it doesn’t rain, or command locusts to devour the land’s vegetation, or send a plague among my people, (14) if my people, who belong to me, humble themselves, pray, seek to please me, and repudiate their sinful practices, then I will respond from heaven, forgive their sin, and heal their land.

We announce that it is not in any human being or human government that we trust to save us as a nation, but we trust in God.

And we pray, Lord, that You will use these events of the shooting in Las Vegas, the killing in Orlando, and other “acts of pure evil” to stir up a great global concert of prayer that shall result in You Lord, sending a mighty outpouring of the Holy Spirit upon America to restore Holy Spirit empowered biblical faith among all those who call upon Your Name.

Continue to bring President Trump and the entire administration into an alignment with Your will and purposes.

We declare that we will never submit to the deception of Islam, the yoke of Satan’s oppression in Sharia law, or Satan’s empire of evil—the Islamic caliphate.

Oh Lord, You led Your chosen people out of bondage in Egypt to Your Holy Mountain and into the Promised Land so that they might worship You.  In Christ You enabled us to worship You everywhere and in all directions, in “spirit and in truth.” Your Word tells us that it is “For freedom that Christ has set us free.” We will never submit to Satan’s yoke of slavery.

We announce that Jesus Christ and NOT Mohammad is the Lord, and that Jesus said and says now, “I am the way, and the truth, and the life. No one comes to the Father except through me.” (John 14:6 NET)

We pronounce God’s righteous judgment upon your prophet Mohammed, your Quran and the Hadith, your Imams, your Ayatollahs, and your jihadist warriors. We declare that they are all deceived by Satan into rejecting Jesus, who in fact is the cornerstone. (cf. Acts 4:11)

Acts 4:11 NET. (11) This Jesus is the stone that was rejected by you, the builders, that has become the cornerstone.

We joyfully proclaim to all who are in bondage to Satan that by God’s grace, “.. there is salvation in no one else, for there is no other name under heaven given among people by which we must be saved.” (Acts 4:12)

Please join together in the name of Jesus and in the unity of the Holy Spirit to pray into this.

Please send any guidance you receive in piercing the cloaking or breaking these curses.

Continue to Pray for the President

We also need to pray for President Trump. Pray that the Lord will use the words spoken in his speech naming this, “an act of pure evil.”

Pray that people will respond to his call for unity as a nation based on our faith and values, his call to us to prayer, and also his pointing to God as our source of hope in dark times.

Brad Long with Martin Boardman and the PRMI Discernment Team