You are here: Home / Discerning The Times / Giving thanks for President’s Obama’s Speech

It has taken a while for me to pray through and to wait before reacting to President Obama’s ISIS Speech.  And even as I wrote this on the airplane on the way to an event, the Coalition was unleashing airstrikes against targets in Syria and Iraq. For those of you who were praying for that to happen, you will recall that a military man sent a note asking that we pray that President Obama would not reveal too much to the enemy. I was relieved that he had not, but now I am not so sure. He may have revealed more than I saw at first, not to the enemy, but to praying Christians. Read on!

We were also praying that the Lord would raise up the Joshua workers of the likes of Jon III Sobieski, the King of Poland, who had the leadership gifts and military genius as well as the means to defeat and turn back the Ottoman Turks from the gates of Vienna thus saving Western Christendom from being overcome by Islam. 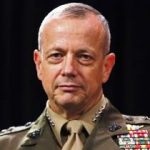 I trust the Lord has answered this prayer.  Retired Marine Gen. John Allen has been selected to lead the anti-ISIS coalition.  He has commanded troops in Afghanistan. Already some partners are emerging in this coalition who are bringing military power to bear. Pray for him to succeed in all aspects in the war against the Islamic State.

Personally, I am grateful Mr. Obama has stated his purpose to “degrade and destroy ISIS” and that the call to action has been initiated. Given the equivocation that we have seen in this President, I’d say that is promising. There were some parts of the speech that I thought were really good.

I want to share a response from another intercessor that needs to be discerned.

After watching the speech, Bernie McGale, a gifted and empowered Canadian intercessor, sent me a note saying that as he was watching President Obama speak, it seemed to him as if the President’s hands were tied behind his back, that something was limiting or constraining our President from taking action.

We know he never wanted to take on a new war.  He resisted entering the fray in Syria 3 years ago. He has been committed to bringing home American military personnel from the Middle East to finally end more than a decade of warring. Was the Lord bending him finally to take appropriate action against the ISIS threat not just in Iraq, but also in Syria? Clearly, this was an extraordinarily difficult decision for the President.  Let us discern this word together. Has the Holy Spirit allowed us this insight so that we can pray for him more knowledgeably and thus effectively?

I do not have any clear guidance right now as to how to pray about the situation. But I have noted already that a number of military experts are complaining about the “artificial limitations” Obama is putting on the military effort.

Do you have guidance?  I have a feeling that this limiting has to do with the stronghold of liberal progressivism, but I will hold that discernment until after I have heard from you about that.

Father, we ask you to break the power of Satan to bolster limitations to action so that ISIS may grow in its ability and power to accomplish its demonic purposes. Thy Kingdom come, they will be done, on earth as it is in heaven!

If you listened carefully to Mr. Obama’s speech vowing to “degrade and ultimately destroy” the Islamic Terrorist Group, ISIS, you would have heard him refer to the various means of national power.

1. The first and most obvious is the nation’s military forces.
2. Next is economic power.
3. There is also diplomatic influence and power expressed through the ability to form coalitions.
4.  A fourth form of power goes under the category of “moral.” This is the national purpose and vision that drives a nation and unifies its people.  It is what enables nations to make the sacrifices necessary to defend core values and defeat an enemy. 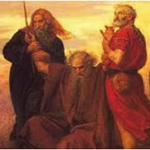 I have been pondering the different forms of national power. When the President invoked God’s blessing on America, our military and this venture—the traditional way of concluding a presidential address—it occurred to me that there is yet another form of power, one that is undertaken by the Church of Jesus Christ.

This fifth form of national power is spiritual and involves the work of intercessors.
I have been teaching on the nature of strongholds that Satan needs to accomplish his purposes and the ways in which the Lord works through Moses in intercession, and Joshua on the ground, to overcome those strongholds—to degrade and ultimately destroy those strongholds!

There is a spiritual warfare dimension to all this. We must engage demonic spirits at work in this stronghold. This is particularly true when we speak of the stronghold of Radical Islam. Let us not be deceived: ISIS has no fear in declaring their intentions.  Their goal is to destroy the Jewish people as well as the Church of Jesus Christ and to establish a Caliphate with sharia law world-wide.

I believe President George W. Bush not only understood this fifth form of power which is spiritual, but personally knew Jesus Christ as the source. In 2005  I received the astonishing invitation, along with several other religious leaders, to visit President Bush at the White House. This was at the lowest point possible for President Bush. Iraq was a disaster and getting worse. Everything was at the bottom. I realize now that that small group of us were called to the White house to mobilize the fifth form of national power, when all others were failing.

In our meeting, President Bush said as much! He shared his own personal testimony from his heart.   He asked for prayer and said, “How can I ever tell the secular press how important prayer is in defeating this evil that we are dealing with in Iraq and that is trying to destroy Israel.”  I was already an intercessor for him but after that personal visit my intercessions increased. I suspect that it was the same for the others who attended that meeting. In 2007 President Bush against all public opinion launched the surge with the appointment for a Gifted Joshua, General Petraious who gained the victory in Iraq.

Whether or not our government recognizes this fifth form of power needed in the face of a national enemy, let us take up the Christian mandate and privilege that is ours to stand in the gap before our Father in Jesus’ name and in the power of the Holy Spirit.  That is what I am trying to do. And I know many of you are also. Let us persevere!

Here is my prayer for President Obama.

Heavenly Father, I pray for our President to seek your ways and your wisdom. Grant him vision to see all that is needed to defeat the evil of Radical Islam. Bless him together with Congress to invite and welcome the prayers of those who have the power to defeat demonic strongholds in the name of Jesus Christ.

Father, bless the whole Obama family. Protect them all—Michelle, Barack, Sasha and Maleah.  May they seek to know and follow Jesus as their Lord and Savior. In Jesus’ name, Amen.

Pray for the President as the Holy Spirit directs you.