You are here: Home / Discerning The Times / Good Intelligence Coming to Intercessors for Iran

The Lord is sending a great wave of the Holy Spirit among the people of Iran. The intention is to bring the freedom and life of Jesus Christ into their hearts.

Such a revival would reverberate throughout Iranian society.

This is battle space three with which intercessors are familiar. Together we rejoice in people’s salvation.

Our joy can increase with our victory in two other battle spaces. Through our prayers God can change history in remarkable ways.

The situation in Iran remains fluid. I, Brad, believe it is urgent we keep cooperating with the Holy Spirit.

I invite you to learn more about two additional battle spaces in which you can join us in experiencing victory in Iran.

An underlying grace the Holy Spirit provides in intercession and spiritual warfare is good intelligence.

We receive this knowledge from Holy Spirit as he reveals our heavenly Father’s will.

We Need Good Intelligence in a Battle Space

We need an ongoing flow of good intelligence to discern how the Holy Spirit may be calling us to pray. For example —

• What is taking place among the archons in the heavenly battlespace over Iran?

• In society and politics, what are leaders saying and doing in these dimensions that may reveal hidden forces from either God or the demonic?

• What movements are occurring among the populace at the battlespace of the ground-level spiritual realm?

A ground rule for good intelligence in intercession is to understand the battlefield and the overarching battle space encompassing our warfare.

This requirement applies to all three of the battle spaces with which we deal. Therefore we use gathered intelligence to understand each battle space.

Only after the Holy Spirit has provided what we need to guide our prayer will he call us to engage in any battle space.

So let me step back for a moment from providing guidance in praying for Iran in order to give a short teaching on the battle spaces.

Three Battle Spaces in any
Intercessory and Spiritual Warfare Engagement

I have received many comments from intercessors which show familiarity with battle space three. Intercessors know how to pray for the salvation of Iranians and for specific individuals in Iran.

We are grateful for your heartfelt prayers and appreciate your commitment to honoring Jesus Christ and advancing his kingdom.

Many other comments from intercessors have led me to recognize there is little understanding of battle spaces one and two.

Understanding the battle spaces revealed in the Bible increases our comprehension of the warfare to which we are called.

We can then recognize and incorporate these additional dimensions of the battle into our prayer.

Our prayer for people’s salvation can expand to include the discipling of nations. We can also overcome the grip of demonic powers darkening people’s minds.

We can pray for beneficial changes in society and for the release of people to hear the gospel of Jesus Christ.

So now, I’d like to start with a graphic of the battle spaces. It comes from the Mountain Top Equipping teaching. 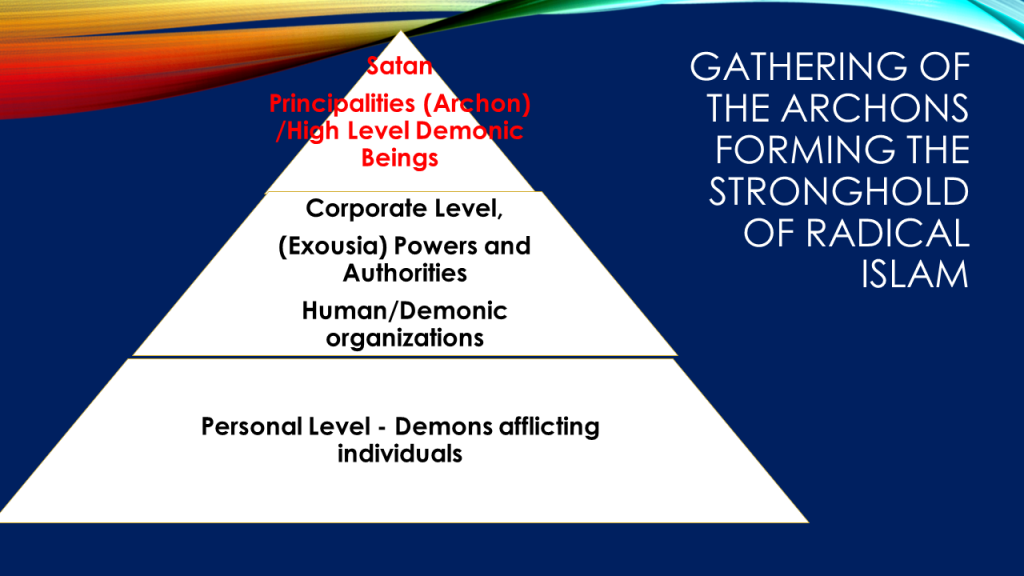 As you can see, the chart briefly describes three different levels of reality that may be involved in any prayer engagement.

Note the progression from top to bottom. All three battle spaces are present in our current engagement regarding Iran.

Next, in this video from the Mountain Top Equipping teaching I explain the chart and review the three battle spaces which comprise every engagement.

Experience has shown the Holy Spirit may call us into any of them.

What Happens at the “Ground Level” Human Dimension

In addition, these two reports from The Clarion Project will help you understand what takes place at the “ground level” human dimension.

The first is a graphic from an article that points out what has fueled the protests in Iran. Source: 5 Quick Facts About the Uprising in Iran

This graphic suggests that these protests are much deeper than just concerns about the economics of daily life. The root causes of the unrest may well have to do with the theocratic Islamic dictatorship itself.

Also exposed is the reality that this unrest comes from broad segments of the population.

In such deep discontent, there is the opportunity for the Lord to advance His Kingdom. At the same time, it gives the Devil opportunity to impose a new and even more terrible evil and oppression.

I believe this intelligence offers us an incentive to pray.

It also provides guidance for prayer, particularly in the third battle space which includes the large numbers of people under the yoke of Islamic tyranny.

The second is an article written by Shahriar Kia, an Iranian human rights activist and political analyst who has been on the front lines in Iran.

His insights may give those opposing the regime practical ways to pray, especially for the Holy Spirit’s unraveling of the demonic stronghold. Source: How to Kick Out the Ayatollahs in Iran

An intercessor just sent in an article I feel I should share with you as well. Iranian immigrants in Canada spoke out in favor of President Trump’s courageous stand regarding Iran.

Their amazing word interfaces with our prayer work which asks that the words of President Trump will be used by the Holy Spirit as prophetic words to shape reality. Source: Iranian pro-freedom protesters praise Trump for standing with Iranian people. Say “Shame on Trudeau.”

Satan’s Moves in the Archon and

So far our intelligence gathering has mostly addressed the third battle space at the ground level. We need more information to help us all when called to engage in battle spaces one and two.

In battle space one we will oppose the high-level demons behind the system of Shia Islam.

Battle space two concerns the tearing apart of collusion between the Devil and human leaders, in this case the ayatollahs and mullahs who hold all power in Iran.

Our Need for Guidance in Prayer at This Time

We are lacking guidance at the present time in prayer for Iran.

The need is for good intelligence in the battle spaces of archons and of interactions between human leaders and the demonic.

As yet we are not getting guidance from the Holy Spirit, including through Internet research.

We are not hearing what God and the Devil are doing in the Archon and Human Leadership battle spaces.

The guidance for which we are asking for your help improves when we ask and discern certain questions.

We have included specific questions at this point as an example for you in knowing how to ask this type of question in your prayer.

Please consider asking God for guidance on these questions.

• What are the high-level demonic spirits doing in the heavenly realms that affects the human realm?

• What is Satan doing in the leaders? As an example, how are the leaders shifting strategies?

• And, above all, what is God doing in the leaders? How is the Holy Spirit calling us to cooperate in his work in the leaders’ hearts?

• What intercessory and spiritual warfare tactics is the Lord calling us to deploy?

When you discern that you have received intelligence from the Holy Spirit, please consider sharing it. But please understand that sometimes I receive over a hundred e-mails a day. I may have missed discernment that you already sent in!

So if you have already sent me or Martin something that relates to the battle spaces in Iran and we have not responded, please resend.

When we have gathered more intelligence we will share it with you.

I think Satan would like to divert our attention away from this ongoing battle for the Kingdom of God in Iran. So let’s not let him do that!