You are here: Home / Israel / Iran Ready to Unleash a Devastating Attack on Israel

I believe the Holy Spirit has just exposed Satan’s plans against Israel through an Iranian general’s boasting.

I recently read an article in Jihad Watch by Robert Spencer. In his article he discusses another article about the Iranian general which originated with the Times of Israel.

When I read Spencer’s article, the Holy Spirit fell on me and called me into an engagement to block the implementation of Satan’s plans to destroy Israel.

The Lord has also provided intelligence to guide us in how we are called to cooperate with the Holy Spirit in thwarting those plans.

The timing is urgent. I invite you to join me. Now here is what I was shown.

Spencer highlights the following from the Times of Israel article.

Iranian general: “International Islamic army has formed in Syria…Zionist regime was never in danger as it is now”

“In a recent speech, the deputy commander of Iran’s Revolutionary Guards (IRGC) boasted that the ‘Islamic army in Syria’ in the Golan Heights was awaiting orders to eradicate the ‘evil regime’ of Israel.

“He also said the Tehran-backed Hezbollah terror group had 100,000 missiles aimed at Israel.

“’Today an international Islamic army has been formed in Syria, and the voices of the Muslims are heard near the Golan,’ he said. ‘Orders are awaited, so that… the eradication of the evil regime [Israel] will land and the life of this regime will be ended for good. The life of the Zionist regime was never in danger as it is now.'”

If you wish, you can read the original article in the Times of Israel and Spencer’s article commenting on it in Jihad Watch.

Through the Iranian general’s boastful words I believe the Holy Spirit has exposed the following important facts.

Though the Iranian general may be bluffing, the public exposure of these facts by Iranian leadership suggests the strong possibility that the Israel Defense Force may move preemptively to destroy the threat before it can be unleashed against Israel.

All of this suggests that Satan is setting things up for great evil.

While many other critical prayer battles are taking place right now on many levels, this particular battle is strategic to the fulfillment of God’s plans through Israel.

To fulfill God’s plans, the nation and people of Israel must not be destroyed.

We need to break the curse that is contained in the Iranian general’s words, “so that… the eradication of the evil regime [Israel] will land and the life of this regime will be ended for good.”

Each of the public revelations which I mentioned may provide guidance for you in prayer.

The Holy Spirit is calling me to focus prayer on disrupting the chain of command along which would pass the order to unleash this massive attack against Israel.

My prayer is to either prevent the order from being given or to delay it long enough that Israel can ameliorate the effects of the attack.

Disrupting the Chain of Command That Passes Down Through Each Battle Space.

Satan’s chain of command extends from the first battle space, the high-level demonic powers over Iran, down to the second, and then to the third battle spaces, both of which incorporate human beings.

So far in the first battle space, I have not been called to engage the high-level demons. But I have been asking the Lord to expose who they are. I have received only general guidance at this point.

The Lord has been leading me to focus on Battle Space Two, which is the interface between the demonic spirits and the human leaders through whom they work. As I pray, I am using as a visual guide the following picture from a Times of Israel article, taken in Tehran, Iran, on May 20, 2015. 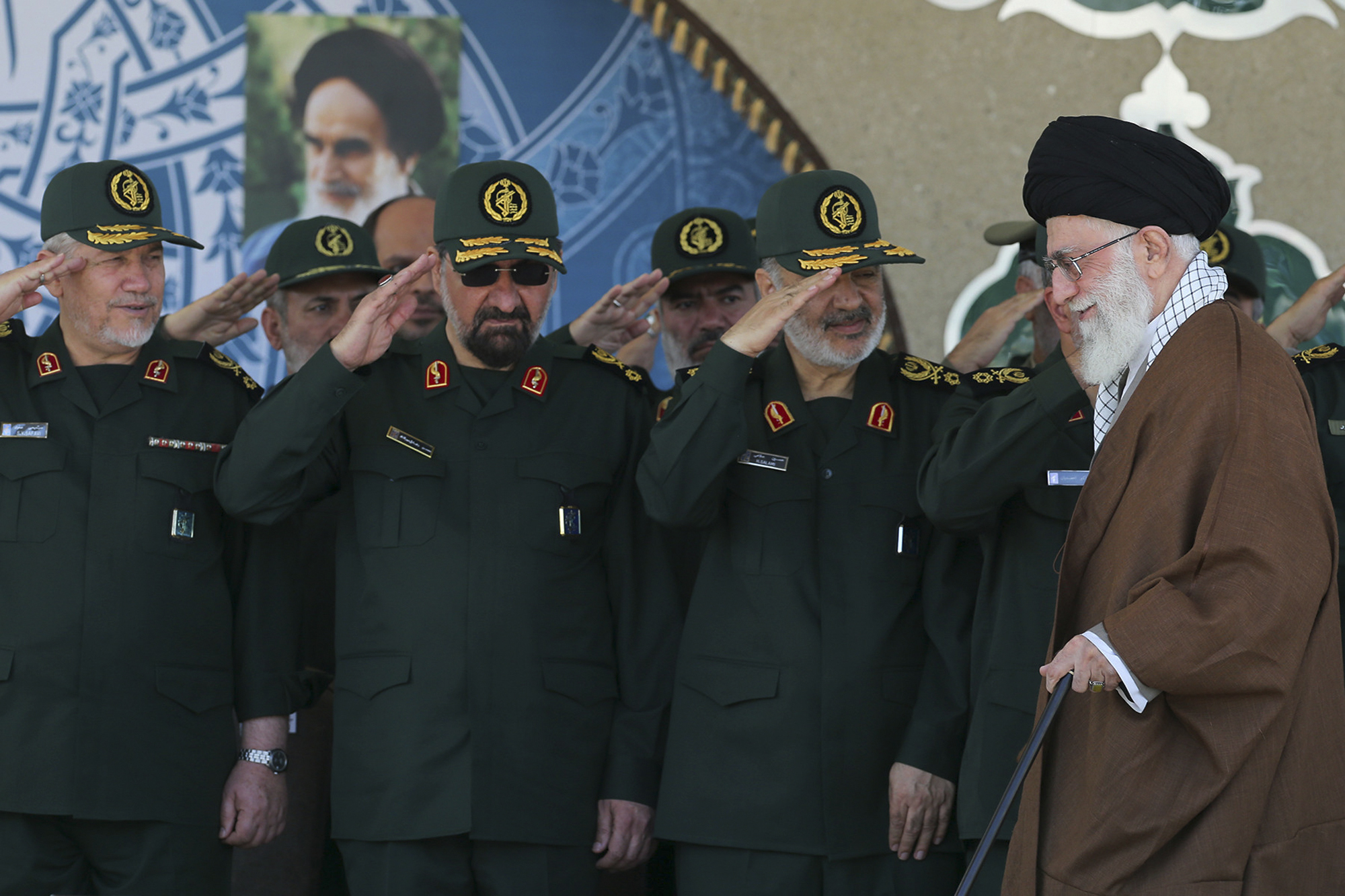 Guidelines for Praying into the Second Battle Space.

As I pray while viewing the picture, in my mind’s eye I see everything breaking down between Khamenei, who would give the orders, and the row of commanders who would actually implement the attacks.

This engagement seems to be intensifying.

Is the Lord calling you in the same way?

Or are you hearing other tactics he is calling us to deploy?

Please let Martin and me know right away about any guidance you receive.