You are here: Home / Discerning The Times / Powerful Prayer for Israel Revealed Through Alignment Of Messianic Jews, Arab and Gentile Christians

The Alignment Conference Revealed a Key

I and a small PRMI team have just returned from Israel. We were invited to the Alignment Conference by two Messianic Jewish organizations, Tikkun International and Revive Israel.

Both of these organizations focus on restoring the Jewish people to a full knowledge of the Godhead: Father, Son and Holy Spirit. They also aim to restore knowledge of God’s plans for Israel.

The conference was based on Asher Intrater’s latest book, Alignment. I strongly recommend that you read Asher’s book.

The conference on alignment was held to encourage Messianic Jews, Arab believers, and Gentile churches to align together in unity to achieve the kingdom purposes of God.

We gathered outside of Jerusalem with leaders from 18 nations. The leaders represented the four great waves of the Holy Spirit converging on the City of Jerusalem, which I wrote about to you in another Discerning The Times.

Many believe this convergence is the beginning of the End Times completion of the Great Commission. 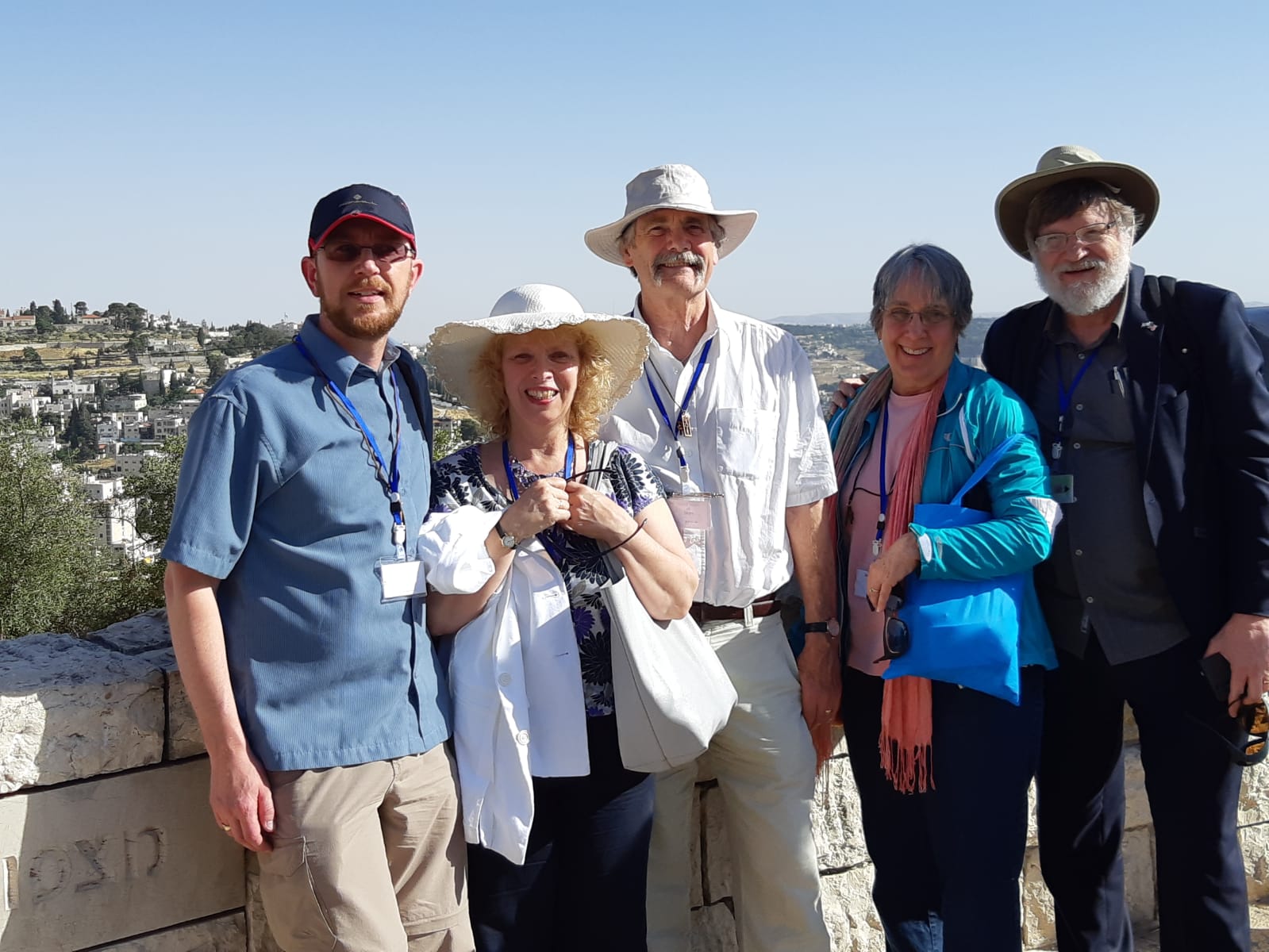 I learned much at this event. In addition, many seeds were sown in terms of developing relationships and of making new connections that I believe will bear much fruit for the Kingdom of God.

We will report further to you as the Tikkun Alignment team, which formed at the conference, moves from the visionary and discernment phases into practical application.

Representatives came to the Alignment conference from the Jewish Messianic movement and the movement of the Holy Spirit among Arabs. Through these representatives the Lord exposed deeper roots of this conflict that go much further back than Mohammad.

Actually, back to the beginnings of the relationship between Abraham and Sarah with their oldest son, Ishmael, and their younger son, Isaac, whom God chose to continue the Covenant.

To really understand this, you need to read Genesis Chapters 16-17, & 21 with both Jewish and Arab eyes.

Ron Cantor, a leader within Tikkun, explained these complicated family relationships with great clarity in an article. Here is the link: Ron Cantor’s article.

We all watched in amazement and thanksgiving as healing and reconciliation began in our midst between the Arab Christians and the Messianic Jews. While this took place many of us were aware of profound shifts taking place in the heavenlies.

The first shift in reconciliation between Jews and Arabs happened on the first day of the conference. An Arab believer stood up and declared that the Land of Israel belonged to God and that he could give it to whomever he chooses. Though the Arab nations may not like the Lord’s land grant to Israel, this is what God has decided to do.

Another profound shift happened on the second day. As we prayed in support of reconciliation between Messianic Jews and Arab Christians, the Jewish and Arab representatives wept together and confessed their sins.

Their united prayer, accompanied by shifts in the heavenlies, gave us guidance in how to pray for the deep healing of the Abrahamic Family.

At the same time we must pray for Arabs to forgive Sarah for rejecting Hagar and her son Ishmael. Also, to accept God’s decision of choosing the younger son, Isaac, instead of the rightful heir, the oldest son, Ishmael, to carry the Abrahamic Covenant of blessing to all nations.

I, however, as a Gentile, a member of the wild olive branch engrafted onto the original Jewish olive tree through faith in Jesus, looked on the family drama taking place before me with a sense of detachment.

As a direct descendant of neither Ishmael nor Isaac, I figured this was something the Jews and Arabs had to work out among themselves!!

But then the Lord moved beyond the Jews and Arabs to include all of us who were engrafted into Abraham’s family through faith in Jesus Christ. I will quote from Ron Cantor’s article as he says it better than I can:

Can you feel God’s heart for Ishmael? Can you see how that spirit of rejection has been passed down through his bloodline? The root of Arab rejection and hatred for Israel is not Radical Islam (not that I am downplaying that evil ideology), but it is rejection from Abraham and Sarah.

This past week we had a small gathering of leaders from our Tikkun Global Messianic Family and invited leaders from around the world, mostly to pray and hear the Lord. After David Demian shared about the wound of Ishmael, one brother stood up and said in repentance, “My attitude has always been toward the Arabs—”save them or kill them.”

Without the heart of God on the matter—it is understandable to have such a desire. These people want to destroy us! But once you see God’s heart—how much He loves his son Ishmael and longs for him to fulfill his calling, it breaks your heart. I must confess that I have tears of love in my eyes, right now as I am writing, for my brother Ishmael—but these tears have been few and far between. I have spent most of my time in the save them or kill them camp, not realizing that I was cursing my brother. My prayer was far from God’s heart.

Confessing my own attitude of “Lord, save ’em or kill ’em.”

I must confess that the brother whom Ron Cantor mentioned was me! After the Islamic terror attacks against America on 9/11 and the subsequent call to mobilize an army of intercessors, my attitude toward Muslims has been, “Lord, save ’em or kill ’em.”

I realized with grief and horror that I had given ground in my own heart for Satan to work his same terrible schemes of hatred and death that he had worked in Muslims! I rushed up front to confess my sins to my Arab Christian brothers and sisters.

A Reassessment of My Call

I know that I am still called and anointed by the Holy Spirit to take part in the prayer and spiritual warfare defeating the demonic strongholds in Islam.

But now I believe the Lord has prepared my heart to take part in the healing of the wounds that gave ground for Satan to work in the first place.

Our participation in this change of heart will lead us to the work of taking part in the advancement of the Kingdom of Jesus among Muslims in love and power.

The result of all this prayer work on earth is that major forces for healing have been unleashed in the heavenlies. It is the role of intercessors like you to continue this profound healing work of removing the ground given to Satan through both the family of Abraham and the Gentiles.

I am convinced that this embryonic work in healing the family of Abraham, extending back even to his actual family, is part of the preparation for an unprecedented outpouring of the Holy Spirit that God the Father is sending to the Muslim world.

Part of our prayer work in cooperating with the Holy Spirit will be overcoming the strongholds Satan has built to fight against the very alignment which God intends to build among his children.

When Satan builds a stronghold, he always starts with what may be called the “ground of entry.” This is some sin and/or brokenness in human hearts that affects human relationships. Satan uses the entry point to gain a foothold within a person or a group.

The different types of demonic footholds cover a wide spectrum. They may include flaming darts, actual attachments, and even possession by demonic spirits.

Usually the entry point begins through unconfessed and unforgiven sin, as well as unhealed inner wounding. These things may allow demons entry into one’s body, mind and soul.

Examples of entry point sins include violations of the Ten Commandments; involvement in the occult; and hatred of someone because of past rejection or hurt.

Once demons have established themselves in a person, they may be passed on to future generations.

For example, in my own family line, my Scottish great-grandfather engaged in violence against the authorities and participated in the occult practices of the Masonic Order. These sins and demons were passed down to me. Together they provided the ground for Satan to build some strongholds in my life.

Satan used the strongholds to block my role in the Kingdom of God. After I received healing and deliverance ministry, I also prayed for forgiveness of my ancestors’ sins. As a result, I was set free of the strongholds.

My own life experience with open doors to the demonic led me to suspect that the persistent conflict between Jews and Arabs has a deep root in wounding and sin.

In regards to Islam, I identified the point of entry by demonic spirits into Mohammad as while he was in the cave of Hira outside of Mecca in 610 AD. This demonization, or even possession, of Mohammad provided Satan with the entry to build the stronghold of Islam.

At its core Islam is driven by virulent hatred of Jews and Christians with the intention of subjugation and extermination.

Islam is also intent upon replacing God’s way of salvation, as revealed in the Old and New Testaments, through imposing the deceptions of Islam upon humanity.

I have documented the development of this demonic stronghold in my book, Discerning the Times: Exposing Satan’s Plans in Islam.

Though I expose the evil of Islam in my book, my long-term purpose is to share how to pray for Muslims. As intercessors we long for them to be set free from hatred and deception in order to come to saving faith in Jesus Christ.

In addition to my book, we have an upcoming training for intercessors who feel the call to pray against demonic strongholds. These strongholds, for example, may be in a local church, a religion, a government, a region, or a culture.

Our Mountain Top Equipping Camp (MTEC) for intercessors at the Community of the Cross takes place on June 11 to June 16. I hope we can spend some time at the MTEC praying into alignment and how it can be further developed.

You still have time to sign up for the MTEC if you feel called to pray for alignment between Messianic Jews and Arab and Gentile Christians.