You are here: Home / Discerning The Times / The Call to Pray in the Midst of a Heightened Terrorist Alert

“Protect me from the snare they have laid for me, and the traps the evildoers have set.”

“Let the wicked fall into their own nets, while I escape??”

Whether these are actual people plotting evil, or evil spirits at work in these men, or both, is hard to tell. But the idea is that a snare has been laid and that evil is being planned.

This may of course reflect the call to pray for her husband, but it felt to her to be a much broader and comprehensive call to pray against this evil, that the Holy Spirit would expose it and thwart it completely.

This word has come right at the moment when the USA, UK and France have shuttered a sizable number of embassies and consulates due to a heightened terror alert in the Middle East and Africa because of a credible threat from Al Qaeda.

Based on the guidance from Psalm 141:9-10, in the power of the name of Jesus, we may be led to pray the following:

Do you witness to this image that this Intercessor received of men gathered in secret, plotting evil?

This may have everything or nothing to do with the heightened terrorist alerts.  Just today as this is being discerned and edited, further guidance has come. The following is excerpted from articles in the Wall Street Journal, Fox News, and the Washington Post.  We may use the information to focus our prayers.

“Al-Qaeda leader Ayman al-Zawahiri ordered the head of the terrorist group’s Yemen affiliate to carry out an attack, according to intercepted communications that have led to the closure of U.S. embassies and a global travel alert,” said a person briefed on the case.

In one communication, Zawahiri, who succeeded Osama bin Laden, gave “clear orders” to Nasir al-Wuhayshi, the founder of al-Qaeda in the Arabian Peninsula, to undertake an attack, the source said. McClatchy newspapers first reported the exchange on Sunday.”

Below is the other key player in this stronghold of Islamic Terrorism that has one form in Al-Qaeda. I just read that he may have been taken out by a missile attack since this intercessor started getting this image of a group of men in secrete plotting evil. Is this picture below those men? Or could they be representative of those who could compose such a group. 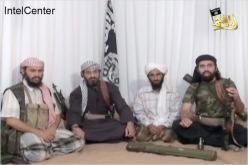 Nasir al-Wuhayshi, a former aide to Al-Qaeda’s late founder Osama bin Laden, tunnelled his way out of prison to become head of the Yemen-based Al-Qaeda in the Arabian Peninnsula.

Quickly pass on any discernment that you may receive so we can get it out to the whole group. I suspect that many lives may depend on us as intercessors getting clear guidance from the Holy Spirit of how we are to step into the gap.