We are all rejoicing at the release of the Rev. Andrew Brunson from a Turkish prison where he had been held for two years.

His release took place because of a worldwide intercessory prayer movement for him and the intervention in his behalf by the highest levels of the American government.

Now that Andrew has been released, the call upon us is to stay engaged in the work of intercessory spiritual warfare prayer.

We are praying for the gates of fortress Islam to come down so that the Gospel may sweep through Turkey into the rest of the Muslim world. As you can see from the map, the Muslim nations of Iran, Iraq and Syria border Turkey. 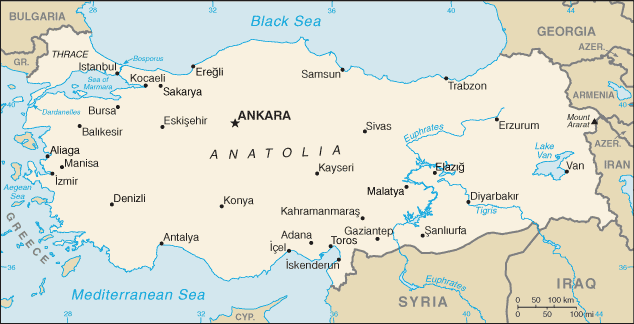 At the Mountain Top Equipping Camp, November 5 – 8, 2018, both Bill Campbell and Richard White shared their experience in Turkey.

The Seven Churches prayer initiative is focused on cooperating with the Holy Spirit to advance the Kingdom of God throughout the empire of Satan in Turkey.

The ground for the initiative is historical – rooted in the Seven Churches named in Revelation 1-3 and in the blood of the martyrs shed in Asia Minor over the centuries. Our basis for prayer is also the oppressed and isolated but staunch witness of Christians in Turkey.

Please pray and ask the Lord how he may be calling you to take part in this on-going prayer work. You will be building on the global concert of prayer ignited during the two years of Andrew’s imprisonment. We will send you more information as our initiative develops.

The territory that makes up Turkey can be seen as a historical gateway. During the Ottoman Caliphate Turkey was Islam’s gateway for the invasion of the Western world from the Middle East.

For our prayer initiative, we are viewing Turkey as a gateway from the Western world into the heart of the Islamic stronghold within the Middle East.

As always get back to us with any discernment you may receive.