You are here: Home / Discerning The Times / Urgent Call to Prayer to Constrain the Evil that May Break Out From North Korea by April 15, 2017

I believe the Holy Spirit is calling many intercessors into the gap before April 15 to prevent some terrible outbreak of evil from North Korea.

U.S. warships are headed toward the North Korean coast as the Asian nation prepares to celebrate the 105th birthday of its founder, Kim Il-sung, on Saturday, April 15.

The celebration may put North? Korea on a military collision course with the United States.? The New York Times reports that North? Korean leader Kim Jong Un will mark the day by either firing a ballistic missile or testing a nuclear device.

Without going into all the history, I believe the Devil is seeking to unleash a military disaster on South Korea through the demonic stronghold of totalitarianism built around the Kim dynasty in North Korea. This would be horrible for both North and South Korea. I suspect that part of Satan’s plan is to remove the church in South Korea which is a vital base for prayer and missions that is strategic for fulfilling the great commission.

In this short video, I share how the Holy Spirit has been calling me to pray into this situation. The Lord told me that this was not to be put into print but rather offered as an act of prayer. I invite you, if you witness to this, to join in agreement with these prayers.

Please get guidance from the Holy Spirit as to how Jesus may be calling you to join with Him in defeating Satan’s plans for evil and advancing God’s Kingdom. As always, please send any guidance you receive to help guide us all in prayer. 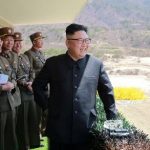 Here is a picture of Kim Jong Un to focus our prayers,which may need to include binding any demonic powers working through him.

In Christ,
Brad Long
With Martin Boardman and the Discernment Team